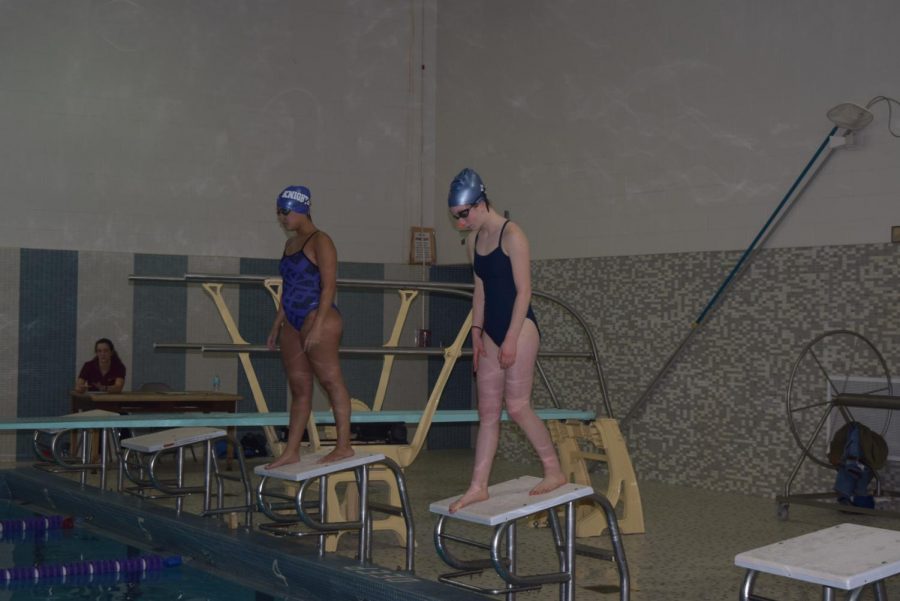 “Small but mighty” should be the motto of the Holyoke High Varsity Swim Team. With only nine swimmers for this 2018-2019 season, it’s easy to forget they even exist. But what they lack in number, they make up for in determination, enthusiasm, and a family-like feel that you won’t find anywhere else in the building.

This is the first swim season at Holyoke High coached by Ms. Adriana Grabski, a first year English as a Second Language teacher at Holyoke High. Coach Grabski has a long and accomplished history with swimming. She has been swimming personally and competitively for over 17 years. Grabski graduated from Virginia Tech, a Division 1 school, and she swam during all four years of attendance. She even qualified for the Olympic trials in her college years. Her coaching is outstanding and has improved not only the performance of the swim team, but the attitudes of returning and new swimmers.

“She’s considerate and attentive to each of her athletes, and she gives us a workout that feels meaningful,” Mikayla Villegas, a four year swimmer, said when asked about her experience on the team this year.

A typical practice for the swim team consists of two hours of both “dry land” work outs and swimming. Coach Grabski prides herself on being fair with her swimmers and not giving any sets that she, herself, can’t do; she often joins the athletes in the dry land sets. On an average day, the more experienced swimmers are expected to swim at least 2,200 yards, which is 88 laps.

The individual swimmers on the team all try their hardest to create an atmosphere where they, and their fellow teammates, can succeed. With no cuts from the team, it brings a lot of different skill levels into the sport, but this is never an issue between teammates. Instead of competing with one another, they lift each other up and cheer for one another at every single meet.

Being part of the team doesn’t stop when the team leaves the pool either. Many swimmers’ favorite part of being on the team are the team dinners after meets, and making lifelong bonds with people from different grades and interests than their own.

“I’ve reffed a lot of different sports, but [swimming] has never had any sportsmanship issues, ever,” is what head referee Josie Rigby had to say about the conduct during a captain’s meeting.

Even though the Holyoke Varsity Swim Team is only nine members strong, the character and support that comes from the team and the dedication they possess for each other and the sport itself enriches the life of those students at Holyoke High School.