Did the Addams Family Musical have Charles Addams rolling in his grave? 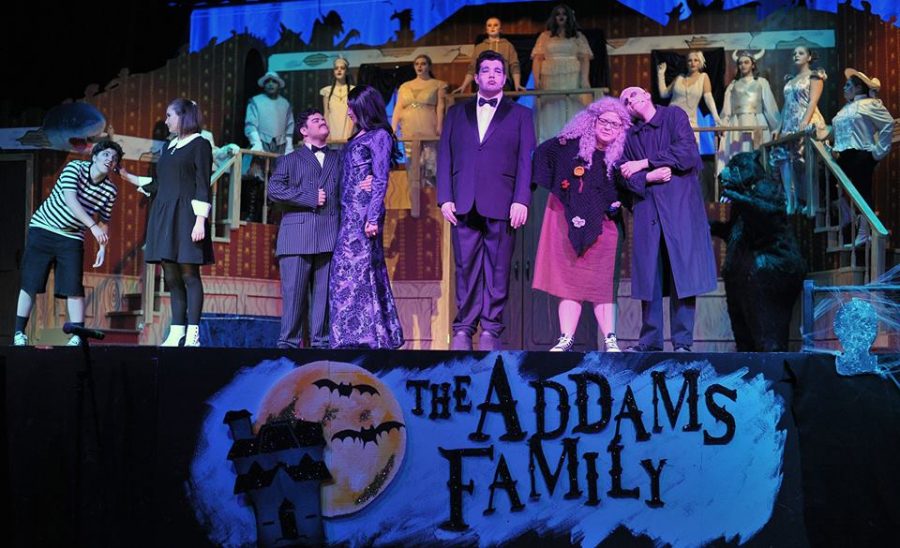 The annual Holyoke High Musical saw the arrival of the iconic macabre and bizarre Addams Family to the auditorium stage with wild success! For four performances, from March 21st for March 24th, Holyoke High students got in touch with their dark side to give a sharp, high energy, and most importantly, fun experience to the Holyoke community.

Each year, I am so surprised by the amount of support the community at large gives the musical and this year is no different. With the upgrade of microphones from the mayor himself (11k worth!), and the fact that so many people in the audience were prominent members of Holyoke’s community, rather than just school figures and the sheer number of ads and shout outs in the back of the program are truly a testament to its importance to the Paper City.

The show truly lived up to its hype. Even on closing night, each performer, no matter how burnt out after three shows, managed to pull off a performance that had the audience at the edge of their seats and dying of laughter. In the past, HHS has shown their strength in the genre in previous shows like Sister Act and Shrek: The Musical. The Addams Family is no different. Though the comedy lands only in a small part due to the writing, a majority of the value came from the extremely talented and dedicated cast.

The leads were especially bright this year, with each one bringing their strengths to the show. However, three standouts to me this year were Adriel Berrios as “Gomez,” Trish Haradon as “Alice Beinike,” and Nathan Reed as “Lurch.”

Adriel is a sophomore this year, but his underclassmen status does not hinder his ability in the slightest bit. It makes me thoroughly excited to see what show he does next. Many of the jokes came from Gomez’s tangents and character, and the fact that he could land so many of them clearly shows his dedication to his character. His mannerisms on stage and his delivery of lines created such a rich character that you could actually believe that this character could exist in a three dimensional space. His singing voice blended with technical skill, as well as a crucial ability to act out an emotion or scene at the same time, made for an impressive performance.

Trish played the quirky, poetic, and canary clad Alice Beineke and what made her stand out this year was her clear dedication in going “above and beyond” in her performance. Although the screaming into a fully turned on microphone sometimes scared the bejeezus out of me, her character was thoroughly enjoyable. Trish clearly put a lot of effort into creating the motivations for, and vocal demands of, Alice. She gave a show stopping performance during her solo “Waiting,” where she chewed up the scenery to the audiences delight. Her interactions with other characters, by contrast, always looked so fluid and natural. Her ability to play off of her cast mates so easily is admirable and makes me excited to see what character she will breathe life into for her senior performance.

Nathan Reed played the tall, mostly nonverbal, “Lurch” this year, and he was honestly one of the most heartwarming characters of the show. Anyone who could growl for three hours in a conversational manner, and travel the stage in those extremely tall platform boots, is clearly dedicated and talented. Lurch might not have been the most lively character, but he stunned the audience with his surprise solo in “Move towards the Darkness.”

Though there was copious praise of the acting and set dressing, there were a couple of criticisms from audience members. Through the show, we couldn’t help but notice the costumes were not enhancing the story, but instead detracting from it. Some costumes were done flawlessly, such as Gomez’s pinstriped suit and Alice’s beautiful yellow dress. However, the ensemble costumes and the hemming and detailing of several lead costumes left much to be desired. The purpose and the image of the ancestors was supposed to be of forces of the story, a combined mass that might be distinct from the set, but not necessarily distinct from each other. They are all ghosts, after all. In other productions of the show, the ancestors have a strict color theme which makes them cohesive. However, in this production, several ancestors had distracting details on their costumes. “The Bride” and some others had not grayed out their hair, making them distracting. In addition, several ancestors had black details such as stripes under conquistador armor and trims on dresses. The details on some of the lead costumes also became a distraction to some watchers, such as Pugsley’s pants being improperly tailored and Wednesday’s jacket having some golden detailing that got lost in the design next to the yellow.

The second critique came from the curtain call, and the fact that there were certain cast members who instead of bowing as themselves, bowed in character. This was very minor, and people adored the antics, but the purpose of curtain call is to allow the audience to applaud you and your performance. Although many people feel a kinship with their characters, especially after being them for four shows, this is supposed to be a time to soak in the love from the audience and the accolades.

The sets and lighting this year were absolutely superb. I loved the use of colored lighting to add extra ambiance and a bizarre and edgy feeling to each scene. I especially loved the house setting with the edges carved to have little scenes of what I can only describe as impressions from the Quinta Del Sordo. It was these small touches that made the set, and in turn the show so much more lively.

All in all, The Addams Family was a smash hit for Holyoke High with a fun vibe and set, talented actors, and fast paced comedy. It sets a new bar for musicals in the future on our auditorium stage. Although The Addams Family only visited the stage here for four days, I loved it….full disclosure!