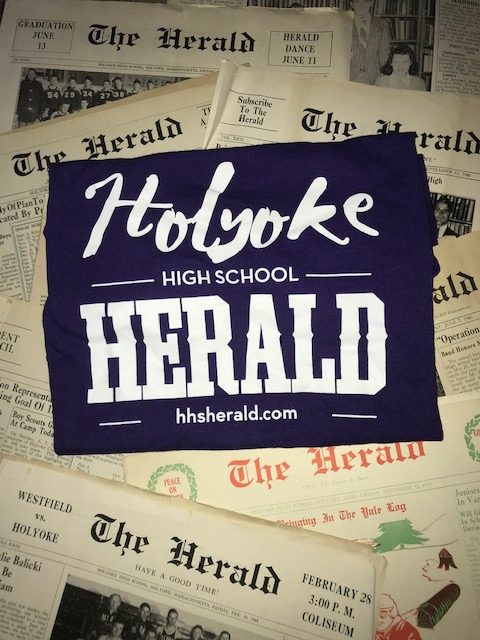 This school year, the Holyoke High Herald celebrates our 121st year of publication, since the first Herald newspaper was printed in 1897. Prior to The Herald, a student-run newspaper called Our Little Pet was originally published for HHS. In celebration of our newspaper’s anniversary, The Herald takes it back to the 1940s and 1950s to compare how our newspaper and Holyoke life has changed through the years.

In a constantly evolving world, one can see a lot change in a span of 70-80 years. While there remain many similarities in both of these publications and in our school today, there are also many differences as various school activities, sports, and clubs have been introduced and many changes have taken place regarding The Herald and the faculty in our school.

In the 1940s, the Superintendent of Holyoke High School was Mr. William R. Peck and the principal of the high school was Principal Henry J. Fitzpatrick, who prior to being principal, taught at HHS. These honorable men were very involved with the activities and on goings at Holyoke High School and are well-known names in Holyoke to this day. One major way we can see the influence they had is through the creation of Fitzpatrick’s Ice Skating Rink, where many Holyokers come to ice skate and our Ice hockey team, along with South Hadley, practices and has their home games. Additionally, the name Mr. William R. Peck is widely known, as there is a middle school named after him in Holyoke: Peck Middle School. Also, in the 1940s, the adviser of the Herald was Mr. O’Donnell. We have also had many famous names pass through our doors at HHS. In 1932, the HHS auditorium hosted many famous names, including Presidents Woodrow Wilson and William Howard Taft, Helen Keller and her teacher Miss Sullivan, and Chaplain Chidwick of Battleship Maine.

Additionally, the Herald has had many highly successful and notable names graduate from our school. For example, in the 1940s, Ray D’Addario attended Holyoke High School and was a Herald photographer during his years. He carried his photography expertise with him to Nuremberg, Germany where he took pictures of the Nuremberg war trials. Additionally, former Herald staff photographer: Bob Grenier attended HHS in the late 1940s and won Second Prize in the United States National Photo Contest in child interest division in 1948. He was a staff photographer for The Herald for two years and went on to study photography at the New York Institute of Photography, where he graduated and became a well known professional photographer. Shortly after high school, at the age 20, he began a photography business with his neighbor: Grenier/Ducharme Studio, which today is Grynn and Barrett Studios, a successful thriving business, which takes photos at Holyoke High school dances, sporting events, and school picture days. Robert Grenier was later inducted into the Holyoke High School Hall of Fame in 1995.

In 1946, the Herald was printed on newspapers and distributed around to students and faculty in the school. In 1946, 864 students and faculty members paid 10 cents a week for their Herald subscription and it was a highly successful publication. To this day, the Herald is still highly successful, however in the recent decades, we’ve expanded our database to the internet through our website, as it has become a more convenient option and allows us to spread our voices to the greater Holyoke community. In 1946, 206 students expressed their interest in The Herald and applied to join. The process was highly selective, as all applicants had to maintain a B in their English class to even be considered for literary positions. In the 1940s, there was a Herald class and a class for beginners which met after school once a week. We are proud to say that through the years, the Herald has continued to receive immense support and has attracted many young vibrant writers and photographers to apply to be members. To this day, an application process is still used, where aspiring sophomores through seniors, are required to send in a mock article and/or photos and a brief application about themselves, due to the growing interest that The Herald receives. Additionally, this year for the first time, we have two “Journalism” classes, with students combined from both The Herald and The Annual which are led by advisers Ms. Fallon and Ms. Martins. In the past, in the 1940s, Mr. O’Donnell was the adviser of The Herald and within the recent years, The Herald’s adviser was Mr. Courchesne.

In the mid-1900s, a popular aspect of The Herald newspapers, was the “Grins and Guffaws” section. This section of the newspaper reported on on goings at HHS and included humorous stories regarding school life. In the recent years, we’ve had many new additions, such as “Moriarty’s Monsters” which was composed of intriguing articles on bizarre and interesting animals and we’ve also recently launched a podcast section and video section known as the Roundtable which creates mini episodes on HHS life. Additionally, in the past there used to be a popular dance for Herald members. In the recent years, we have continued to have a Herald celebration event at the end of the year, with The Annual Melva Awards, where student-produced articles and photography are recognized and students receive awards for their work.

In 1946, a field hockey team was first organized and under the leadership of Miss Jane Squire, girls were taught the basics of field hockey and worked up to building their first team. Over the years, our girl’s field hockey team has drastically improved and grown, with the girls team being the first and only team to have an undefeated season last year on the new HHS turf. Additionally, when war broke out in 1941, Holyoke High initiated special military training exercises on campus for students. Obstacle courses were set up on Mackenzie Field and a full-sized airplane was installed in the basement of the school to give students on-hand training. Additionally, students frequently had air raid and blackout drills to prepare in case of an emergency.

In the 1900s, the St. Agnes Guild was a big popular school event, where freshmen and sophomores came together at the War Memorial in Holyoke for their annual dance. Also, the Junior-Senior Prom was a big event. To this day, the Junior-Senior Prom is still a highlight of student life and up until recently, the Guild has remained popular, along with the tradition that girls ask guys to the dance. However, many changes have occurred regarding these dances, as they no longer take place at the War Memorial, but now are held at venues such as the Log Cabin and the Delaney House. Also, in the past, there used to be orchestras that provided music for the dances, but today we hire DJs to provide the music. Lastly, there were many clubs in the past that no longer exist today such as Acapella club and students used to have recess, which no longer exists today.

With The Herald celebrating it’s 121st year of publication, it can be fun to look back on the past and compare it to the present. We are proud to have had so many successful and enthusiastic writers and photographers pass through our doors and are grateful to have so many members today. We’re excited for the future generation of The Herald and Holyoke High School and can’t wait to see what changes take place within the coming years!