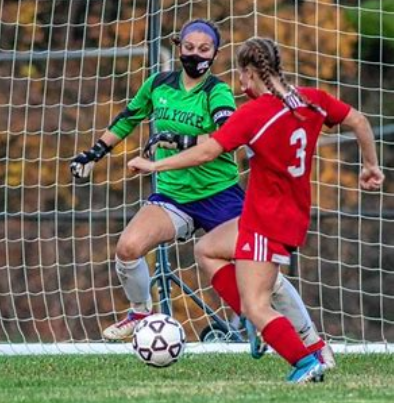 On Thursday, April 29th, 2021 Taryn Ryan signed her letter of intent to play Division ||| Women’s Soccer at Springfield College. Soccer has been a huge part of her life since she was four years old. Her time playing soccer started in the Holyoke Youth Soccer league which her dad coached at the time. Now finishing her senior year of high school she’s preparing herself to start a new chapter of her life academically and athletically.

Ryan plans on achieving her doctorate in physical therapy after six years because she was accepted into their six year accelerated physical therapy program which is one of the best in the country. This private college located in Springfield, Massachusetts offers Division III athletics. When Ryan was asked why she chose Springfield College to be new home away from home one thing she said was “Springfield College has such a welcoming environment and everyone seems so nice” After playing soccer for such a good team environment for this many years in Holyoke Ryan seems hopeful to get the same experience throughout these next years. Choosing a school can be extremely difficult and for a student athlete the amount of difficulty in that decision doubles. Ryan gave all student athletes a helpful chunk of advice during her interview by saying “ Pick a school not just for athletes but for academics as well.  If you weren’t playing sports would you see yourself at this school? At the end of the day you have to love the school you’re at and feel at home.” The academic and athletic path Ryan is continuing on is proof that this advice is something that is key.

Ryan has played soccer every fall season since her freshman year but she says that her senior season was the season that stood out to her the most. For obvious reasons surrounding COVID-19 of course but she says the bond that her team created is one that has become unforgettable.  She thanks her coaches from both soccer and basketball for making her not only the athlete she is today but the person as well.  The group of people she has surrounded herself with throughout her life are a big part of how she got to this point.