Restored faith in the Police force? 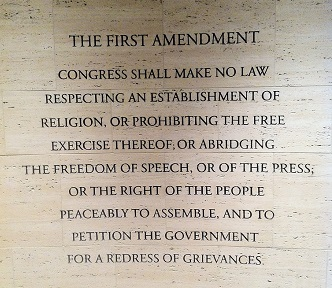 Do you know what the First Amendment means? It protects our right to live. If you are black, white, Brown, Purple, a parplegic and if you have a learning disability. Even if you are an alien from another planet, come to do no harm and live among us, you are protected from this amendment. The First Amendment rights are important because they don’t just protect our rights to act, but instead they protect us. A short time ago, we were all protesting for women’s voices to be heard and our bodies to be respected. A Dayton, Ohio police officer pulled a paraplegic out of his car, pinned him to the ground, handcuffed and dragged him to his police cruiser. Previously, I wrote an article celebrating the fact that we haven’t heard anything about police brutality. Whether they were unarmed and killed, sentenced to life in prison, or found not guilty, many times they did not receive the necessary verdict.

It is one thing to treat an unarmed black man who can walk like they are a piece of dirty street candy. It is another thing to treat someone who is deaf or someone who cannot walk like dirty street candy. We are not candy. I finally thought we had restored faith in our justice system. However, we cannot restore it. The system is dead. Damaged. Gone for good and never coming back. Ever. I guess it is not entirely their fault. At times in American History when slavery was common, the police were created to bring slaves back. Like I stated in my other article, “We’re Not Really Free. We are still slaves.” Organizations just try modern ways to dehumanize us. They treat us as if we’re from Krypton, or we’re the flash, or we’re gods and we bleed gold. These disturbing comments are not true. I bleed red, I cannot fly, (although that would be really cool). I don’t have a batcave or a girl cave. I don’t go out shooting people with arrows and calling myself a hero, nor was I marooned on an isolated island.

I am human. I am black. I like my skin color and I cannot change it. If I could, I would. If I did this, would I let go of this “Am I next” fear? If we could all change from black to white, then we would all have an easier time. There would be less fear. We would all be happy if we were just like all of you. I thought being white would be easy. I really did, but my skin color is beautiful, and is perfect in its own right. However, if we live in a bubble of fear, then we are missing out on life. Watching the news segments about Ownsby are disturbing. Still, that is no way to treat someone. The stop was a drug-related stop but this is not always the case. The only good news about this incident is that he is alive. He is here to tell his story. He is here to heal and receive justice.

I can honestly say that everyone in the black community is tired. I thought that the Derek Chauvin incident would have represented a turning point. What happened was completely unacceptable. Police officers put on their badge and suit and go out on routine patrol. They come across a black man or woman in a car doing nothing. Some decide to take them out and tase them until they are unconscious. A person who was a victim of this atrocity was Sandra Bland. Daunte Wright was affected when a rookie officer “accidently” pulled the gun out instead of a taser. A simple freeze would be enough. According to the police, it is never enough because simple police protocols are never followed when they are killing us. Although Ownsby did not die and was not shot, he was still treated unfairly and treated like he was not human. They have always viewed us as some kind of threat. These issues have settled down a bit. However, incidents begin to happen and make everyone uneasy as a result.

The real question is the following: Is the faith in the justice system restored? Is it faithful to its black people? I am a libra and all about balance. We make up half of the world’s population and deserve to be respected.

“Black is a color of power and strength”