Holyoke High Basketball player Callie Cavanaugh scores her 1,000 point this past Wednesday - in her junior year! 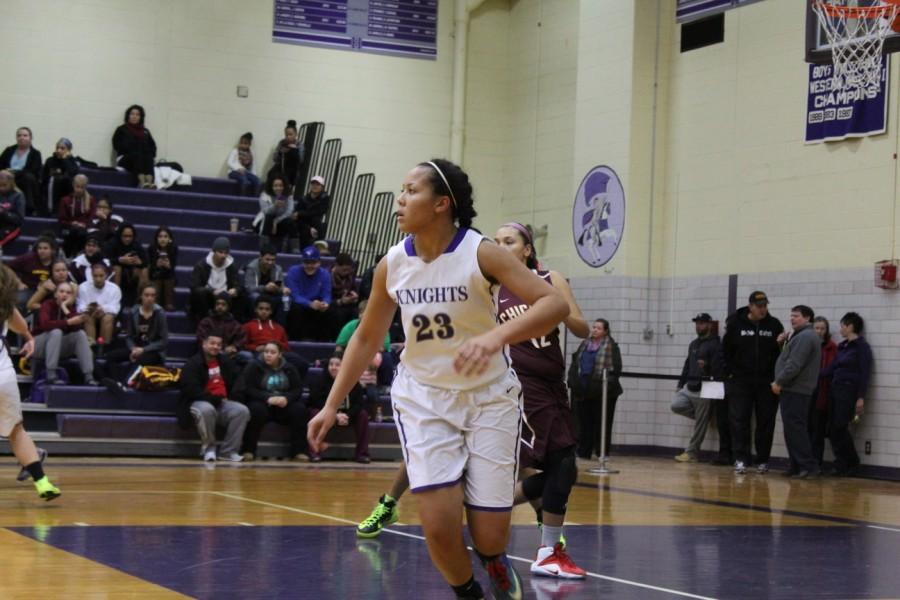 The Holyoke Lady Knights Basketball team took on the Amherst Hurricanes this past Wednesday. The Lady Knights came into the game posting an impressive 9-0 record, but the bigger story was Junior Callie Cavanaugh only needed 10 more points to reach the 1,000 point plateau. This season she is currently averaging 27.9 points a game, it seemed that she would almost certainly reach the milestone against Amherst.

Early in the first quarter Callie came down the court and drained a 3 to put her career total to 993 points. She followed up her big shot after she was dished a pass on a breakaway and finished in transition. The first quarter progressed and Callie was fouled twice. She went to the line both times and hit 2 of 4 free throws. She remained quiet on the scoreboard, but played a big role defensively as she grabbed plenty of rebounds and sent back a number of shots. At the end of the first quarter Holyoke led 14-13

The Lady Knights started the second quarter slow. Amherst hit multiple shots including two 3 point bombs to jump out in front by a score of 20-14. With family and friends packed into the stands Callie received a pass on the wing and threw up a 3 point shot. With the whole crowd holding their breath the play seemed to go in slow motion. The shot went up and slowly dropped into the hoop. The crowd went crazy as family stormed the court to congratulate the 6’2 junior. A very surreal moment that is something that all basketball players strive to accomplish. With plenty of time left in her junior campaign and her whole senior season it seems that the sky is the limit for Callie. She could very well end her career as the leading scorer in Holyoke High history.

The Herald would like to personally congratulate Callie Cavanaugh on scoring 1,000 career points! We hope nothing but the best to you in your future endeavors